What a rollercoaster ride this blogging business is!  Having dived in headfirst last week, I got to Monday and suddenly realized a few things:

Then I saw Coleen Patrick’s new blog and nearly had a tear.  Leaning into the Leap is a beautiful and inspiring lesson about the things we don’t want to do (or think we can’t), and the lessons we can learn from dogs.  It was so simple, and so profound, that I simply had to share it – here, on Twitter – everywhere.

On an entirely different note, it’s the little things that keep us going, right?  The biggest buzz for a newbie is getting a Like on your page within half on hour of putting it out there!

was my first Like!  I’ve seen her around a few times now, and have no idea how she finds us newbie’s, but the best surprise of all was her blog.  An uncensored, wicked-funny romp through “My Discarded Men” – with some solid advice for single women (and men) on the dating scene (did I mention Uncensored?).

Anyway, for very different reasons, this blog is dedicated to Coleen and Ella – for keeping me going 🙂

Relationships are funny things.  The superficial ones you always know you have to work at and so, in an odd way, you don’t take them for granted.  But then there are those other ones that stick around, so long a forgotten limb – until they’re (nearly) gone.

You’d think sixteen years might make me pay attention.  But next thing I’m sitting in the therapist’s chair and she states, as if it’s nothing, “Well, he’s probably the most consistent relationship in your life up until now!”

And that was the moment that I woke up to the fact that the best man in my life was of the fur persuasion!

I met Pepi when I was eighteen years old.  As is usually the case with these things, it wasn’t like I went looking for him.  It was my flatmate at the time who wanted a man pup – but when I saw his brother, it was love at first sight.

I didn’t realize then that he was probably too young to be brought home, so little surprise now that he has a Mommy complex.

But who could blame me?  The morning after the first night – he loved me more, not less!  Before long, he was the only one with a toe fetish that was impossible to resist 🙂

When I think about it now, he has always had a lot going for him on the man stakes:

–       fiercely loyal and protective of his girl

And that’s not all.

He always notices my sense of style!  The day I shaved off all my hair, he was particularly incensed.  Whether it was because he didn’t like it, or didn’t recognize me, either way his outrage was well founded, showing he’s a man of taste.

But best of all he loves me most in my daggiest of states (Aussie slang for ‘unfashionable, untidy and dirty’).  Okay, that is probably self-serving on his part, as it means (luckily for the rest of the world) that I’m not leaving home.  Still, it’s nice to be loved for who you are.

Which brings me to the present and the reason for my visit to the Doc.  I can’t leave home anymore.  The last time I did, after four days away, he had started on his own Advanced Vetcare Directive of Nil by Mouth.

The time before that, when I left him for a day with a friend at a retirement village, he cried so hard all day the neighbours worried he’d be next.

It turns out sweet sixteen is not so sweet for the little fella, especially when I’m not around.

I’m left with two choices.  One is – forever.  The other is – ‘inconvenient’, but it is a second chance. 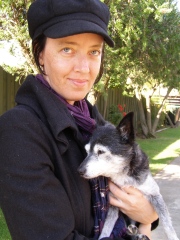 It requires medication for his mind, pain relief for his bones, a walk every day before breakfast, home cooked meals and treats and Me – and I wouldn’t have it any other way.

I think about the times I lived alone with him, huddled in front of a bar heater in the gloomy Melbourne winter, watching Xena while he gnawed my shoe.  He was there.  He was always there.  And once he’s gone, he’s gone.  At least now he has no doubt that he’s the Best Man in My Life.

What about you?  Do you have loved ones of the fur persuasion?  Do they know they’re loved?  What would you do if you had a second chance?