This week I’ve met some beautiful people, all of who – in their own way – are grappling with the question of time, regret, living in the moment.  I’m touched by their journeys, especially The Mezz and The Nomad, who echo some of mine.

It’s like we’re always fighting with ourselves, wondering why, in the two or twenty years that passed, we are still here.  But lessons in acceptance sometimes come from the most unlikely places.

Pepi was never one to live outside the moment.  Up until he was fifteen, both he and I were fully convinced of his invincibility.  In this Alter fantasy, he was Bolt, and I his helpless human sidekick.

(See – that’s me in the background – just trying to keep up!)

There was a time when fifty throws of the ball in the park was puppy’s play for him.  He’d bolt on and off the bed, the couch, the front porch step at something close to warp – and if you dared to squeak that squeaky toy…

The only time he sat still was when I ate, and then there were those eyes…

Slowly as his superpowers waned, there always seemed to be a good excuse.

When he lost sight of the ball it was…Aw, well, he does have cataracts.

When he grabbed the ball and ran for home at throw number eight…It must be his arthritis.

When he left a puddle on the kitchen floor…well, that one was harder to excuse.

The day his brain broke we were not prepared.

I had taken him with me for a dinner visit.  Pepi had paced the unfamiliar house the whole night until we left.  It must be he’s excited, I thought.

When we got home he was hyper.  He tried to jump up on the couch, but missed and hit his head.  And then, before my eyes, it all unraveled.

His back legs went limp.  His eyes rolled wild.  He tried to walk and kept on banging into things.

We were both shrieking – he from terror, and me in a futile attempt to stop him injuring himself.  It was like he’d had a stroke.

When we went to see the vet, I didn’t expect them to tell me the only thing they could prescribe was rest.

Idiopathic Vestibular Disease is an alarming, sudden onset loss of balance in older dogs with no known cause.  Though the symptoms can be indicative of other underlying issues, such as brain tumors, luckily for Pepi, this was not the case.  Remarkably, his symptoms mostly subsided after three full days of rest.

But he never has been quite the same.

It was like that moment when Bolt realized it was all a scam.  He never did have superpowers.  It was just an elaborate story people told him so they could entertain themselves.

Any wonder that depression, dementia and hand feeding followed.

Until that point, I had probably spent most of his adult life wishing he would calm the F down.  Now I wished he would just be the way he was before.

I could have put us both out of our misery then, but hadn’t his whole life been working its way to this point?

How could I deny him the part where’s he earned his right to be a pampered pooch?

He’s not the same dog, it’s true.  He’s a Superdog that just retired.

He rarely speaks these days.  He knows his limits.  Sometimes he forgets things.

One day recently he was left home alone for an unusually long time.  When I got back, he was fed.  We played a little game with squeaky toy.  He ate his chew.  After that, he went to sleep in front of the TV, as he likes to do.

Half way through The Good Wife, he woke up with a start.  I caught him staring at me like he’d seen a ghost.  It was clear he couldn’t remember me coming home.  Or the game.  Or being fed.  Or the chew.  He wanted the whole thing, all over again.

I could have said no, but he would have gone to bed all angry.

So I gave him supper, and he slept.  So happily.

The passing of time into old age seems like a cruel joke – but only if we fight it.  Now that we’ve accepted his mortality, it’s a whole new world of discovery on the path to peace. 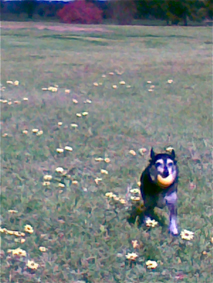 Have you ever been confronted with the unexpected passing of time?  How have you coped?  If you’ve written or read a post about it, feel free to leave a link in the comments so we can share…