Fourteen months ago I developed this terribly anti-social dry cough.

Thanks to digital media, you’re lucky enough not to hear it.  But for those in close proximity, it’s not exactly the most endearing habit on earth.

After much nagging, I eventually paid a visit to the specialist (paid being the operative word) – only to be told what I already knew.

There’s nothing wrong with me!

So I guess that makes me psychosomatically insane…

In search of answers, I did a little googling this morning.  And if what they say about Louise L. Hay’s theories is correct, I am apparently resisting change.  Either that, or it’s a blatant “world, look at me!” grab for attention.

My fear is that she’s right – on both counts.   At least, it seems like an effective strategy for continued unemployment…

From my childhood, I have far too many fond memories of being doted on when sick.  Mum, tending to me in the middle of the night, with alternate hot and cold compresses, vapour rubs and lemon ginger teas.

In my memory, I was never more loved than when I was unwell.

Fast forward a few years, and suddenly you realise there’s no Mum anymore.  What was once Mum’s love is now a matter of self-love.

And that’s where it gets tricky.

A couple of years ago, I was commissioned by a local university to develop some videos on Positive Education.

It’s strange, how the universe sends you subtle messages.  During the research phase, I filled out the online survey of character strengths developed by the Authentic Happiness Testing Centre at University of Pennsylvania.

The survey creates a rank of 24 core character strengths, highlighting your top five.  But what is most revealing are the strengths that fall at the bottom.

Among my bottom five were “Capacity to love and be loved” and “Zest, enthusiasm and energy”.

Put those two things together, and what you have is someone who doesn’t love you or themselves enough to get off their lazy ass and Exercise!! 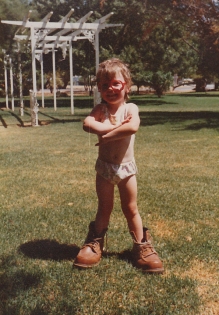 Me. The last time I had
Zest, Enthusiasm and Energy.

But now I have this pesky cough screaming at me.  A little tell tale hack drawing the world’s attention to my self neglect.

If, like me, you suffer from “vague and general feelings of powerlessness”, then you need to read Girl in the Hat’s “Body Talk” series, starting with this post.  Now.

There’s a video as well.  You need to watch it.

In it, the science behind a simple posture is explained, made all the more compelling by the fact that it requires no real effort at all.

Basically, anyone who can sit still for two minutes and breathe can do it, so you can see why it appealed to yours truly.

The odd thing is, the day I read Anna Fonté’s post, something clicked.

Since then, I’ve reignited my stop-start relationship with yoga. I’ve started meditating again.  And as of today, I’ve broken through a personal record by cycling for the sixth day in a row!

It’s early days, of course.  I’m almost scared to say it in case I jinx the flow.  But that’s the old me talking.

The new me celebrates achievements as they happen.  And understands that change is a process.

Sometimes it happens imperceptibly.  Like staring at an optical illusion until, suddenly, you see it and you wonder why you never did before.

Next week, I’ll explore this theme more fully.  But in the meantime, I’m curious.

Does anybody out there struggle as I do with the power to change?