When my nephew turned three, I gave him a book called The Chimpanzees of Happytown, by one of my favourite children’s authors, Giles Andreae.

It is a magical, rhyming tale of a Chimpanzee who moves to Drabsville, plants a forbidden seed and eventually transforms the entire city into a colourful, carefree Happytown.

I never knew what an apt story it was for this happy little chap, until last weekend, when he visited Melbourne town for his 10th birthday.

It was his first interstate trip as an unaccompanied minor, for two nights and an unspecified outing with his Aunt.

Melbourne being known for its gloom, we were expecting another week of rain. But by the time J got off the plane, the sun was out and the forecast had been changed.

“You brought the sun with you!” we said, not knowing how true that would turn out to be.

It was a perfect Sunday.

After a bike ride to the local skate park, where I was instructed to record every jump until he got it right…

…we took a one hour ferry ride to the city.

His exuberance at the sights was unexpected. 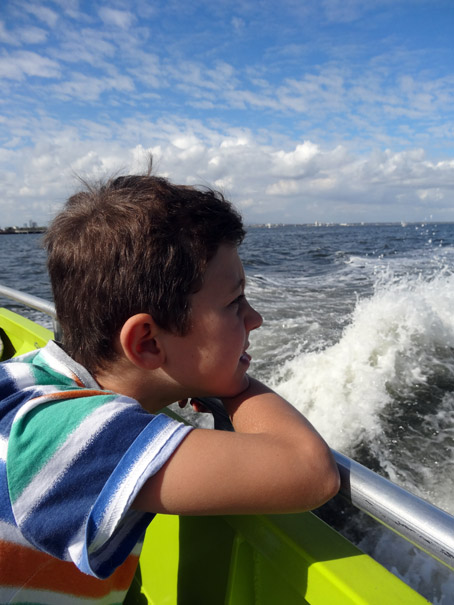 Before long, he had wrestled the camera from my hands.

I think he hoped to do a direct transfer from his brain to Dad’s. 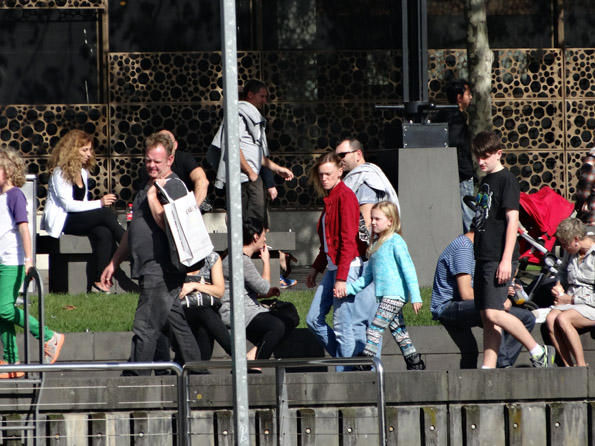 …and then we were off to see the Flying Fruit Fly Circus, a theatrical production by kids aged 8 to 18, about a girl with a circus hidden under her bed.

Following the show, filled with wonder and ice-cream, J was ready to dance all the way home to Happytown.

Aunty Larns, have you seen the movie Dumb Ways to Die? (click the pic to see it)

Debriefing on the way to the airport the next morning, I was surprised by the vision he had of my city.

If you had asked me, I would have told you it is dark and gloomy, and everyone wears black.

That Melbourne has forgotten its roots in a drive for glamour and opulence. And other less flattering things.

But my nephew saw a city full of colour and art, nice historical buildings mixed in with interesting new ones, factories, ships and lots of different things to see and do.

He left me with a smile on my face, and a resolve to get out more and find the colour in my world.

Have a Happy Easter, everyone!

What colourful things do you have planned these holidays?