Some of you may not realise (I know I didn’t until yesterday!) that Father’s Day in Australia happens on the first Sunday of September.  Which means in two days time!

It’s a bummer, really, because I had this Father’s Day all worked out since Susie Lindau’s post My Father the Madman back in June.  (If you haven’t joined her blog yet, it’s more than worth the ride… 🙂 )

The problem is, the mail usually takes longer to get to Tasmania than it does to the other side of the world.  And Dad doesn’t have a computer.  So now it looks like you’re going to get this before he does…I won’t tell if you don’t?

In my comment on Susie Lindau’s post, I made the mistake of saying my Dad was a ‘bit of’ an amateur inventor.  I didn’t expect her to be interested, but she was, so now I have to confess it was a ‘bit of’ a white lie.

My Dad is not so much an amateur inventor as an all-round fix-it man.  He is a builder by trade, and what that means is – even if he has not an ounce of engineering knowledge – he can figure out how stuff works. 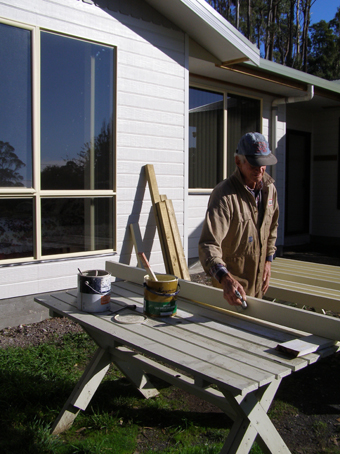 Back when I was still young enough to be admiring, my Dad built a tractor-powered saw mill from second hand chunks of metal (that’s my technical term for it).  He welded it together, sharpened the saws by hand and it all worked like a dream.

I LOVED working on that saw mill.  I just wanted to be one of the boys, and Dad – desperate for all the help he could get – would let me play along.

I’d hang about on building sites and wood chops… 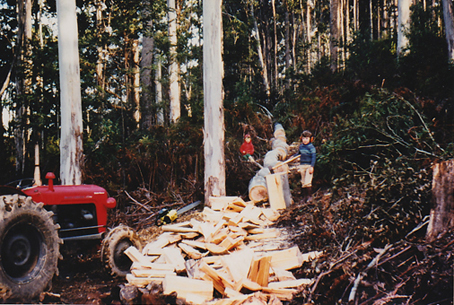 …even in the veggie patch…(actually, that’s not me, it’s a scarecrow 🙂 )

..and all the while Dad (and Mum, of course) were hard at work.

Maybe he could have been an inventor.  But there were never enough hours in the day for my Hard Yakka Dad.  (Hard Yakka is Aussie for ‘hard work’.  It’s also a brand of tough guy workwear.  Check out the video).

Even when we went camping, it was work, work, work for Dad… 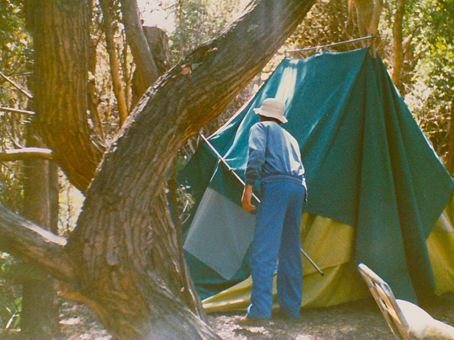 And when eventually he got to stop?  Well.  No words necessary.

Over the years, we’ve had our share of differences. But the great thing about growing up is that you get to see your parents as people.  With stories, and a history of their own.

Dad, the eldest of seven kids, left school early to help his parents on the farm.

Later, he relinquished a Pacific Island dream at their request, and came home to build their house.

The rest, as they say, is history. 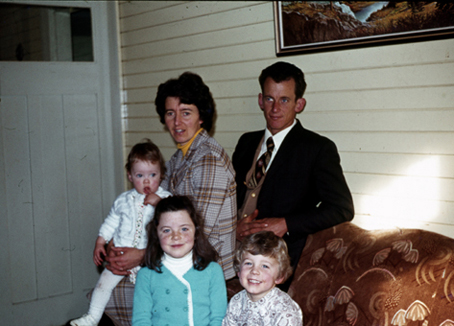 But history is important.  It’s what makes us who we are.

Somehow, in its knowledge, anger dissolves.  It reveals a child’s disappointment in discovering the humanity of those we love.

Today, when I go home, Dad likes to take me on a tour of the homes he’s built.

He’s a stalwart of the industry.  One of the few remaining all-rounders.  Worth his weight in gold – they say.

Except Dad, out of some old-school sense of modesty, continues to charge less than half the going rate.

But at least he’s starting to enjoy himself. 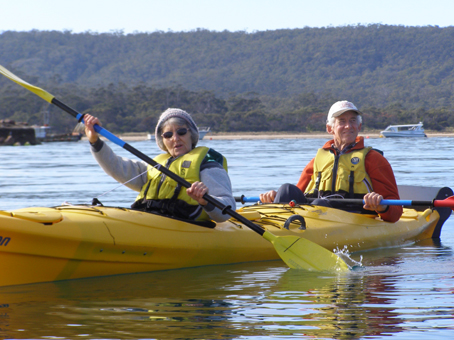 In the meantime, I’ll just love him for the Dad he is.

Wishing Happy Father’s Day to all the Hard Yakka Dad’s out there.

Maybe you know of one yourself?  Or maybe you, too, had a moment of discovery, when you finally saw the man?  Please share….