You know that feeling when you’re staring down the barrel of another year, and you wake up and realise it’s already here?

The next, I’m scowling at the pile of unaccounted for receipts sitting where I left them from the year before.

Where did it all go?

Okay, so I have some photographic evidence of a holiday…

The camping trip that was downgraded (or was it upgraded?) to an apartment by the beach.

A chilly Christmas with hers truly and some friends (who won’t be photographed).

And that promised ‘Aunty outing’ to the zoo – my Christmas gift to the neephs. 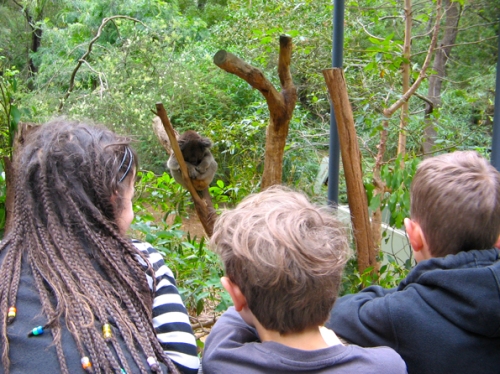 My photos of New Years Eve didn’t really work out.  But I can tell you as I sat with Ms, sharing sangria and tapas, that ours wasn’t the only table wildly entertained by the 9pm city fringe scene.

The group of girls, all wobble between the their too high heels and too short shorts, as they hurried for a tram.

The noble beer wielding knight, dragging his girlfriend up from the middle of the road, as they staggered to their next venue.

Then there was the crowd at the kooky bar we later frequented.  Frat boys in glittering top hats, big bottomed girls and Gangnam Style Indian boys (along with the rest of us), doing our best to groove to the most non-rhythmic and unrecognisable tunes from the eighties, nineties and now.

We all deserted it before midnight in preference for fireworks on the beach.

The highlight was returning to our hotel bar just in time for the DJ to play Dear Pepi’s favourite song – the one we threw the squeaky toy to, singing “Return of the Mack Pep”…

Now, as I stare at my pile of receipts on the thankfully sunnier side of 2013, I realise the reason for the blur.

26 December marked three months in the absence of fur!

Yes, Pepi was just a small scrap of dog.  But sometimes you don’t realise the space they take up until they’re gone.

He was the reason for some complicated work-from-home employment decisions.

He was my excuse reason for escaping social engagements and family obligations.

The reason for my choice of “pets welcome” hovel home.

If you let me, I’d probably say he was the reason I didn’t travel or achieve anything more in my life.  But seriously, how much can you pin on one small dog?

The truth is, in three months of deafening quiet since his absence, my mind has roamed anywhere except the places that it ought to be…

This is more than a New Year.  It’s the end of an era.
It’s time for change.

2013 is a year of no more excuses.  Time to quit hanging on the fringes, time to get back in the flow of life.

So, as well as blogging, I’ll be on the search for an uncomplicated job with a workplace and a break out room.  I’ll be working on a change of residence.  Maybe planning an overseas trip.  And one of these days, I’m pretty sure, I’ll get back to the gym!

Not New Year’s resolutions, as such, but definitely a new theme.  And a new direction.

What’s your theme this year?  If it were a song, what would it be?