So it’s official. Australia is returning to the freakin’ dark ages.

Remember this guy from my post a few weeks back?

The guy who happily stood in front of the “Ditch the Witch…Bob Brown’s Bitch” banner, and then said Julia Gillard was being “too precious”?

Yep. It obviously struck a chord with my fellow country-folk, because he’s our new Prime Minister as of last weekend!

With Tony Abbott at the helm, this is what we have to look forward to:

No more charity (but better roads)

Courtesy of our mining boom, we weathered the global financial crisis better than any country on the globe. Now we’re apparently too rich to help out anyone in need.

We’re so rich we can now afford to buy up all of Indonesia’s leaky boats before the people smugglers get to them. Innovative new plan to →

Since Abbot believes climate change is just a load of “crap”, there’s no more need for any kind of forward environmental planning.

In the world according to Abbot, women have less physiological aptitude for leadership, and abortion is just ‘the easy way out’. So we can soon expect a return to this… 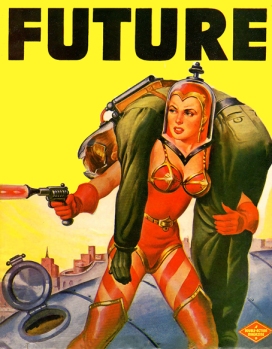 If my head hadn’t been buried in the video project that will never end, maybe I would have heard about it before the applications closed.

The other day my hairdresser told me about a backpacker who overstayed her Visa.  She escaped on an Indonesian boat and is now happily posting Facebook updates from Nepal! I’m all up with the squatting toilet now, so this is sounding good. One small problem: They’re stopping all the boats!

The same hairdresser asked me if I want to join her setting up a commune. All I need is $100,000. Sigh. Apparently it costs money to drop out of society, these days.

4.  Wash it all down with Martini and write this blog.

The 50’s were good for something, at least.

”Cause we’re all doomed, even if we’re livin’ on the moon…’

If someone offered you a ticket, would you move to Mars?