Since my last post, when I discovered no one else wants to go to Mars, I’ve been pondering the source of this ever present need for escape.

You’d think a wholesome upbringing in the country, with home grown vegies and hand made saw mills, might have set me straight.

But maybe I forgot to mention the part where my family was less garden-variety-hippie and more monogamous-Juniper-Creek-meets-Nostradamus freaky.

Growing up, the future my father had mapped out for me was one that would assuredly end. 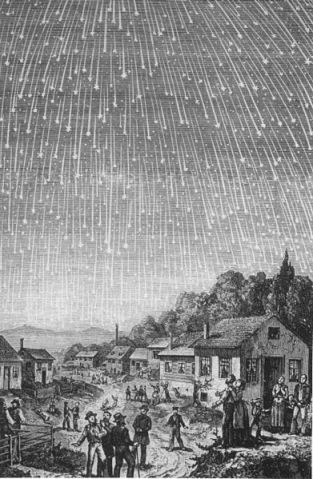 The Truth, according to Dad, was that the world should have imploded back in 1844 (or was it 1833?) after the sky fell in somewhere over North America. So now we were literally on borrowed time. A fact, I felt strongly, that he resented on account of having hungry mouths to feed.

In eighth grade, we moved interstate. My new English teacher set us an assignment. We had to draw a timeline of the future.

Someone clever would invent an electronic device that would replace our windscreens. So when we drove around, we’d be looking at dots on a moving map, instead of cars on a road.

Then, sometime before the Year 2000, the world would end. And we’d all go to heaven and watch the evil undead burn for a thousand years before we made it back to earth for a fresh start.

After I handed in the graphically illustrated project, my teacher came up to me, “Do you really believe all that?”

“Yes.” I said, without a blink. I didn’t understand then why she walked away looking mentally disturbed.

After that, she kept offering to take me on her family outings. I think she was trying to get me away from my parents. But alas, we moved states again and that was that. I never did get my assignment back.

With it, this feeling, like you’re standing in a silent, unfamiliar universe, wondering what comes next.

You wouldn’t think so, but there’s something freeing about that space.

Dreams don’t always work out. It’s not the end of the world (unless that was your dream, and then yeah, that kinda sucks).

But moving on to the more positive spin. It’s a chance to start over. Again.

On those days when I feel like my life’s an epic failure, I think about the Year 2000.

Next to an apocalypse, somehow it doesn’t really seem to matter quite so much. What matters is what’s left – and that is You.

No road map. No future. Just You at the end of the earth.

You could do nothing. But, then again, you could do anything, as well. It could be heaven, if you wanted it to be. What have you got to lose?

Where’s your road map taking you? Does it have a reset button?

Credit for images is as follows: