This week, while the rest of the world was preoccupied with disappearing planes and world heritage de-listings, Ms and I were having our own little social crisis.

Early Saturday morning, we drag ourselves out of bed to prepare lunch for the ever reliable Zoe.

Ms, in a magnanimous attempt to be casual, had invited her over the night before, after hearing that Zoe was:

This is not the first time she’s been invited. No. Third time lucky, we both agree that if she didn’t have plans already in place the night before, there had to be a good chance she would actually show up. Right?

“Come any time after 11am…” says Ms, with a flippant wave of her hand.

At 12.20pm, just as I’m putting the leek and cauliflower puffs in the oven, Ms gets a text:

“Nate’s woken with manflu..what a catastrophe!!im looking after him and not sure if im able to get away in time..I really want to come down…any chance we can reschedule for tomorrow? Let me know, phone about to go flat. Love Nurse Zoe”.

“What the heck is man flu?” pouts the unsuspecting Ms, as I explain the concept of a wildy exaggerated cold. Or, as the Man Flu site describes it: 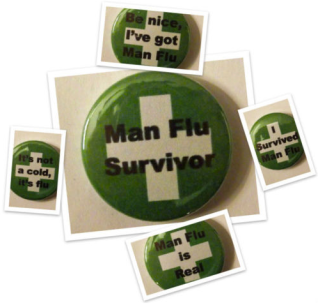 Man Flu:  A crippling and debilitating disorder indiscriminately striking down male members of the human species without warning.

“That’s not a thing!” declares Ms.

But, apparently, it is a thing.

If you believe the study, “high levels of testosterone can weaken immune response”.

I interrupt Ms’ reminiscence about the good old days – before mobile phones and man flu, when people took their social engagements seriously…

“To be fair, if you’re going to act all cool about it, then she probably expects you to, you know, go with the flow…” says I, the least spontaneous person in the room.

Ms grudgingly agrees to reschedule for tomorrow, and the weekend proceeds as follows:

On Monday, lunchtime, I get a text from Ms:

“Zoe at work but no word on the wkend so far…!”

She did quietly leave a Bounty on Ms’ desk, though. Which leaves us with the unresolved dilemma as to what is an acceptable apology for being a no-show.

What do you think? Is it hopelessly old school to expect people to show up when they say they will? Is man flu a fair excuse for ditching on your mates?